Hisrar Tallani is a motivational speaker, anchor, mentor, role model and is the founder of Hisrar Events and Celebrations which is now Mangalore’s one of the most famous event managing company. He seeks to help people tackle their problems and face challenges. He works with the youth, sales teams, C-level executives and entrepreneurs. He graduated from Trinity College London with a Level three certificate in Graded Examination in Communication Skills. He hopes to help young minds understand their potential and work towards achieving it. Some of the topics he covers include inspiring the youth, talking about fears, how to gain confidence and so on.

When asked to tell us about himself, he expressed that rather than speaking on who he is now, he is much more interested in telling us about how exactly it is that he got here, to this stage in life. He then went on to tell us about how at several stages in life he was staring at the face of failure not knowing what to do in order to understand himself and his capabilities and limitations better. What kept him going, he says, was a strong determination to prove both to himself and others that no matter what, he would not give up.

He talks of how easily everyone gave him vague advice like “work hard” but they never told him how exactly he must work hard. Such ambiguous messages left him wondering that it is always easy to give such advice but it is difficult for them to practice what they preach and thereby set an example for the younger generation to follow.

Hisrar compares his life to a rollercoaster ride using the metaphor to talk of how his life has both failures and success stories. He attributes having both failure and successes in his life to making the choice to do what he loves and dreams of. The reason he loves his failures as much as his success is because he encountered them while doing something he loves. He also talks about the courage one needs to follow your dreams because he has come across many and plenty of people who have restrained themselves from doing what they actually want to do because they fear what people would say. This inhibits people from reaching their full potential.

He then goes on to recall how as a boy in school he was very talkative and how his teachers would point this quality of him as being bad. He still remembers the comments they made about him telling him that all that he is good for is talking without pause and nothing else. Now, he recalls these comments and thinks of them in a different light saying how right those teachers were for this is the same quality that helps him earn money and inspire others today. Citing this incident he talks of the importance of focusing on the brighter side of things as doing the exact opposite will not help one grow.

He then proceeded to tell Mangalore Meri Jaan of how his parents wanted him to study abroad because going abroad to study was in vogue at that time. He reluctantly went abroad to study and faced the challenge of living in an entirely alien country, which at the end of the day helped him return home with a Grade six certificate in Communication Skills from the Trinity College in London. As he continued to work he realised how the place that you work for will continue to respect and value you only if you are physically and mentally fit to work for them. The minute you falter due to an illness, they will ask you to pack your bags and leave as weakness is not looked upon with kindness. As he fell sick he had to return home feeling like a failure as he could not keep the job. He gathered the courage to tell his father that he needs some time to figure things out after which his father decided he would go abroad and work for the family while his son could rebuild his life at home. However, after a few months, disaster struck his life again as he received news of his dear father passing away while at work. The pain of not being able to see his father one last time, the ache not being able to hear his voice anymore and above all the underlying guilt of having lost his job as his father went to work took over Hisrar instantly.

Yet, he emerged more determined than ever from this crisis and decided that no matter what he would become successful one day and that till that day comes he would work as hard as he can to achieve it. He began cultivating the habit of reading books, met with people to hold important discussions, watched videos and did everything that he possibly could to accomplish his dreams in life. In all this what served as an eye opener in his life were the words, “You are like a gas stove, you can minimize or maximize your heat as per your need and you are unstoppable.”

He has never once turned back to look at the past events in his life as being unfortunate because it is those events that shaped him and helped him become the person he is today. He is a strong believer in the power of God and says that if we do our best, God Almighty will take care of the rest. He ended the interview on a positive note saying how life is in fact immensely beautiful and saying if you havent reached a happy ending it is only so because it is not the end yet. 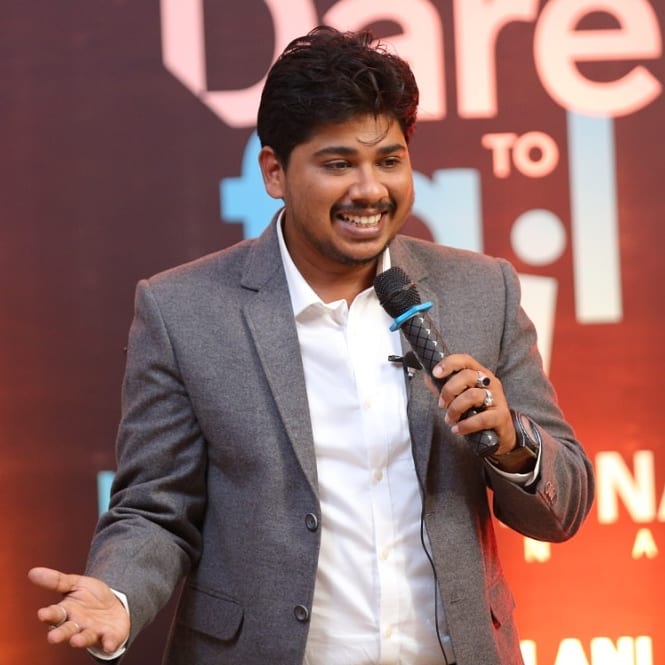