Cfal To Search For The Next Ramanujan, A Mathematics Contest For High School Students To Be Conducted

When G.H.Hardy, the famous mathematician was once asked by another mathematician, Paul Erdos – what his greatest contribution to mathematics was, he unhesitatingly replied that it was the discovery of Ramanujan.  Ramanujan is India’s iconic genius who made deep contributions to mathematics despite his humble beginnings. G.H.Hardy nurtured Ramanujan’s ability by introducing him to interesting and deep problems. Both G.H. Hardy and Paul Erdos believed in familiarizing profound mathematical puzzles to talented young minds. Keeping in stride with this, the Centre for Advanced Learning today announced the launch of its popular, national science contest for students – The Ramanujan Contest. 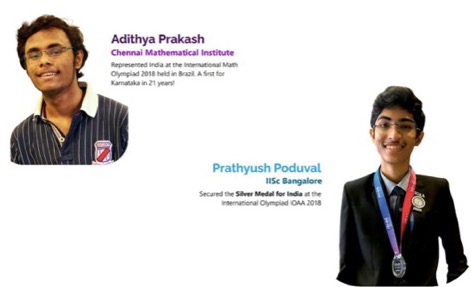 The contest aims to give children puzzles that are more challenging than school standards. Once children spend time with problems that are worthy of their skills, they grow to be capable thinkers. With time, they hone their skills to easily solve problems from International Mathematical Olympiad (IMO), AMTI exam, JEE or the KVPY exam.

Beyond encouraging an interest in mathematics, the contest will prepare students for competition. For better or worse, much of life is competition, be it for jobs or resources or whatever. Competition of any sort trains students to deal with success and failure and teaches them that effective performance requires practice. Moreover, nearly every interesting and worthwhile venture in life comes with some element of pressure; competition teaches students how to handle it. CFAL has been conducting the Ramanujan Contest for the last several years, and students who have participated in it have been able to go to the National level in the NMTC exams, clear the RMO and various other scholarship exams like KVPY and NTSE.

These exams are for two hours, and they are conducted on the last Sunday of each month starting April 24, 2022. The contest comprises 10 tests and will be conducted in Mangalore, Bangalore, Udupi, Hassan, Puttur and Tumakuru. Every month students will be asked to attempt thought proving Puzzles. The cumulative points of these tests determine the awards. The registration fee for students is Rs. 500/-, and it’s free for students of government schools. Students who attempt 8 out of the 10 tests will receive a refund of the registration fee. Prizes worth Rs. 1,00,000/- are up for grabs, and government schools students who win an award at the competition are given scholarships seats at CFAL.

Other top honours from the competition include awards named after Harish Chandra, M.S. Narasimhan and other consolation prizes. Interested students can register by following the link: https://forms.gle/7s49MVLg7fZ9Tm3v9

The Centre for Advanced Learning (CFAL) was established to promote scientific thought and strong conceptual understanding among the students in Mangalore. It may be recalled that the centre has been instrumental in changing the paradigm of learning and students have secured phenomenal results in various competitive exams like NEET, JEE (Mains & Adv.), Olympiads, KCET, NTSE etc. 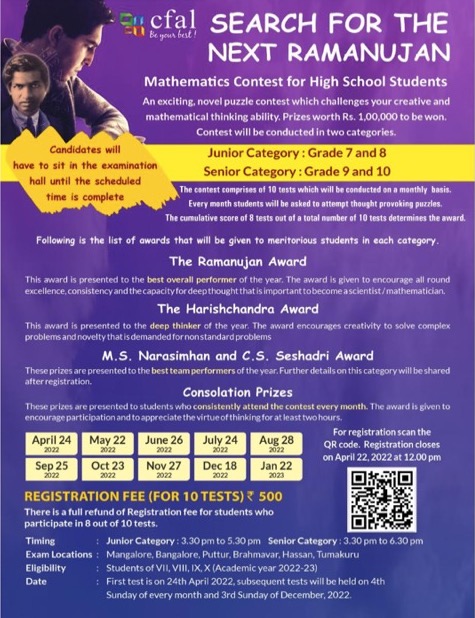