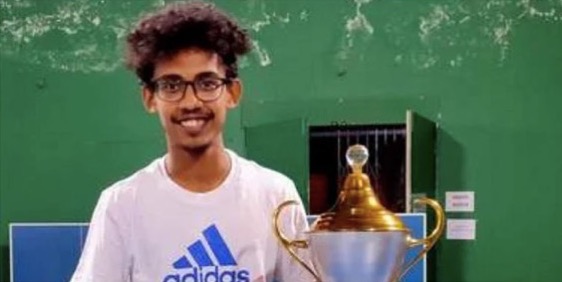 The present generation is all set to take any sort of challenges and meet records, An engineering student of Tumakuru’s Siddaganga Institute of Technology (SIT), Eshwar N, set a new Guinness World Record by running the fastest mile while controlling a table tennis ball with a racquet.

He set the record with the world’s fastest time of 6 min16.53 seconds, breaking the earlier mark of 6 min 24.69 seconds set by Christian Roberto López Rodríguez’s of Yuncos, Spain.

Eshwar, who is a fifth-semester mechanical engineering student, has been playing table tennis for several years. His inspiration was Bengaluru’s MS Ramaiah Institute alumni Susmith Rajendra Barigidad, who had achieved the Guinness World Record a couple of years ago.

Eshwar and Susmith have won many tournaments conducted by the Visvesvaraya Technological University (VTU), Belagavi. But Eshwar stood apart in achieving the Guinness Record as he is forced to wear spectacles for his eyesight problem.

He practised rigorously for hours for a year at the Tumakuru Badminton Academy to prepare himself to set the record, that made him achieve it. “I wanted to achieve something special and did with table tennis as the sport has struck a chord with me since childhood. I will now concentrate on the game to win the table tennis nationals,” Eshwar said.

A pre-military training center, a state government ambitious project, has begun operations in the coastal region. This centre started operating in October in the Uttara...
All News