For DK farmers, skilled coconut climbers are just a phone call away

Pingara, a farmer producer organisation (FPO), on Monday unveiled a committed team of four coconut tree climbers in an effort to overcome the labour shortage in agriculture. One thousand farmers are members of this FPO, according to Ramakishore K, president of Pingara FPO, who spoke to The Times of India. They established a team with “doti,” or telescoping poles, for spraying and gathering arecanuts about a year ago. “There are 22 people working on the project, and we have 10 dotis. The turnover was approximately Rs 30 lakh over the course of nine months. “The farmers called the Pingara team because they were having trouble hiring workers to pick coconuts while harvesting areca.” This is due to the fact that the same workers are typically employed for both areca and coconut harvesting. 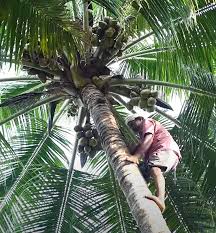 In addition, we discovered a cover story in the journal “Adike Patrike” on the Thiruvananthapuram-based coconut climbing squad “Hello Nariyal.” We decided to form a team with four coconut climbers from Jharkhand after the idea to use the services of the “doti” team for coconut tree climbing failed to materialise. The squad was started with motivation from Hello Nariyal and the encouragement and support of farmers,” he stated. A driver/manager in a minivan will accompany the four people scaling coconut trees. The manager’s responsibility is to answer the phone and let farmers who have reserved services know when the team will arrive.

“We have already received 10 orders and for the time being, we will operate in a radius of about 15 kilometres in Vittal. The team charges Rs 50 per tree and climbs manually using a cable device. The farmers must also understand that if the yield has to increase then the farmers must harvest coconuts at least thrice a year, “ he said. Shree Padre, the editor of the agricultural magazine Adike Patrike, who has been stressing job work in agriculture, said: “For all other purposes, the farmer is a producer, but unfortunately when it comes to harvesting coconuts, the process which should have been sweet and pleasurable has become tougher for the farmer due to the labour crisis. The farmer has to harvest when the harvester is available. Hence, this concept makes harvesting sustainable, economical and at the farmer’s convenience, adding a professional touch to the job. As a step forward, Pingara must work on introducing services on a digital platform,” he said.