The Mangaluru International Airport is guarded by the dog squad of the CISF’s aviation security group (ASG) (MIA). The dogs in the squad have a special skill set that allows them to sniff out dangerous goods, making them a valuable asset to have and adding to the security of this essential business. Goldie, a year-old Golden Retriever who has joined Jack, Bruno, and Julie in the MIA dog team, is the newest recruit. 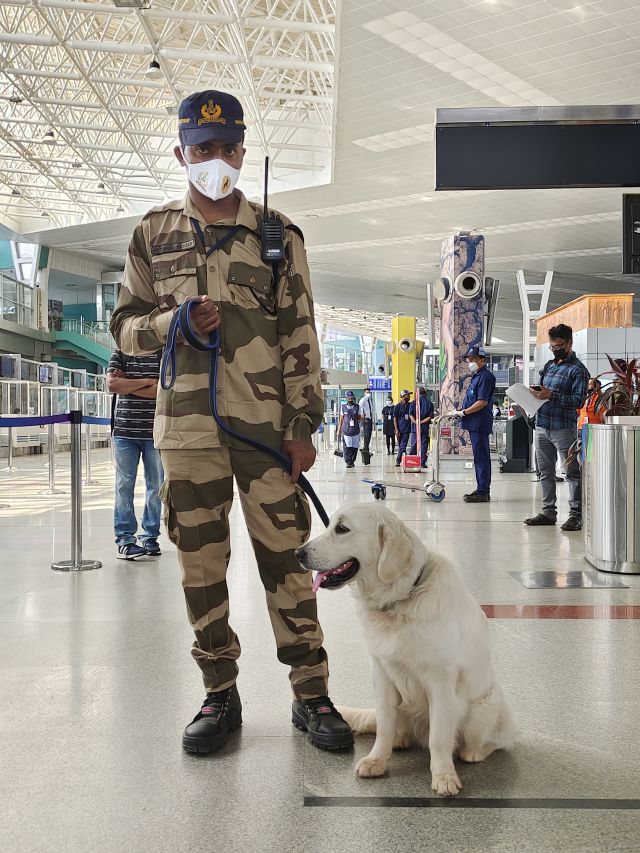 Goldie, by the way, is the squad’s fifth member, having been formed on December 16, 2013.  After a six-month training at Ranchi’s Dog Training School (DTS), Goldie began active service at MIA on Thursday. Goldie, with his white groomed coat of hair, was the focal point of attention at MIA. On the first day of his assignment, Goldie accompanied Jack, the senior member of the now four-man squad, and his handler, head constable (GD) M. M. Auti, on a familiarisation drive of the facility with his handler, Constable (General Duty) Aktarul Hoque. The dogs work in turns to ensure that they get enough rest.

In their free time, handlers train, feed and groom the dogs. Julie and Bruno are handled by constables D Ashok and Manikanta, respectively. The squad is kept in its kennel near Bajpe’s old airfield. The ASG has built an obstacle course and training facility adjacent to the kennel to ensure that the dogs are ready for whatever difficulty they may face in the line of duty.