Minister V. Sunil Kumar, who is in charge of the Dakshina Kannada district, stated that the government was eager to designate Karinja in the Bantwal taluk as an eco-sensitive region in order to safeguard the historic Karinjeshwara temple and the ecosystem surrounding the mountain. The Minister and MLA for Bantwal Rajesh U. Naik went to Karinja as a result of complaints from the general public and temple devotees over the danger posed by stone quarrying. 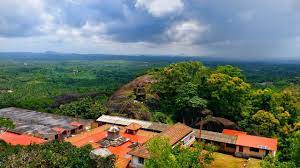 Karinja is found on the National Highway between Mangalore and Mudigere, 36 kilometres from Mangalore. Devotees must up a series of stone-carved stairs to reach both temples, which are located up a hillside with a lovely pond at the base.

To complete the procedures, the Minister has requested that the Deputy Commissioner send a report containing information from the poll, public opinion, and other pertinent information. The region would then be designated a sensitive zone by the government.
The Minister continued, “In addition, the government also plans to promote Karinja as a tourist site by giving guests the barest necessities through the tourism department.”
- Advertisement -