Karnataka is participating in the Republic Day parade in New Delhi today, with a tableau showcasing the state’s different handicrafts. The tableau, titled “Karnataka, the Cradle of Traditional Handicrafts,” is proud to be participating in the yearly event for the 50th time. The state first debuted in the parade in 1972, and this is the 13th year in a straight that its tableau has been included. 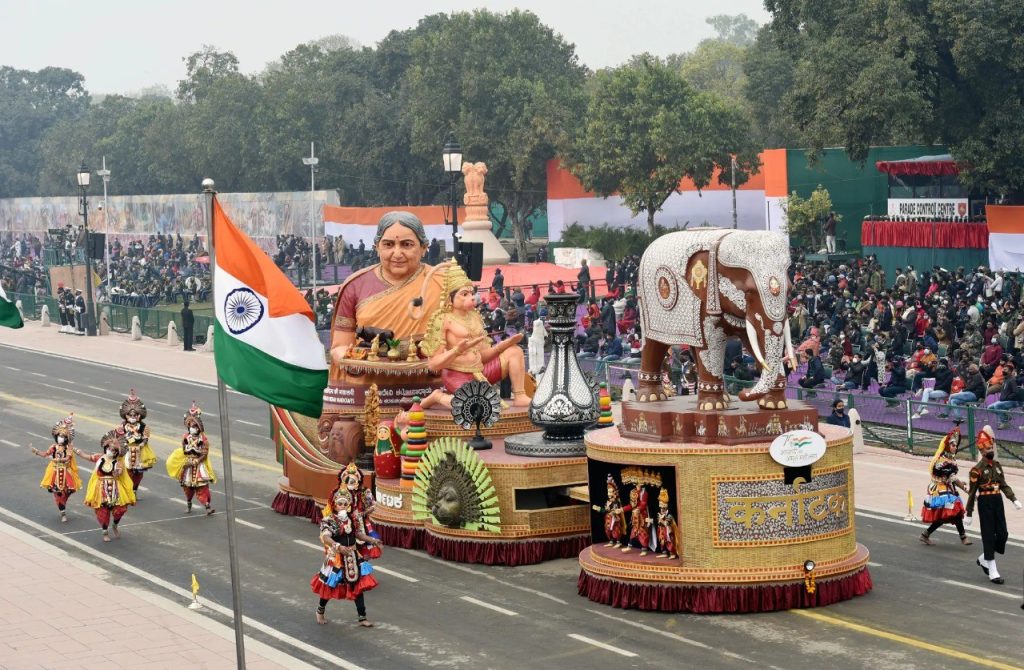 The 45-foot-long, 16-foot-high, and 14-foot-wide tableau, titled ‘Karnataka: The Cradle Of Traditional Handicraft,’ was created by over 100 artists under the direction of renowned art director Shashidhar Adapa. Dr. Radhakrishna Urala, a folk specialist, directed the creation of this tableau, which was made in sections in an art studio in Hesaraghatta, on the outskirts of Mangaluru. Praveen Rao, the music director, wrote both the music and the lyrics. The tableau includes all 16 GI-tagged traditional handicrafts from across the state.

The tableau will be led by a massive Mysuru elephant with rosewood inlay carvings, as well as Bidriware, a metal handicraft from Bidar, Chennapatna toys, Ganjifa cards, and bronzeware. The Navalgund Jamkhana, Gulledgud khana, Ilkal, Molakalmuru, Udupi sarees, Mysore silk, and traditional Kasuti and Sandur Lambani embroidery are all part of this artistic performance. On each side, the Yakshagana figures and bronze face masks of the indigenous Bhootaradhana (spirit worship) depict the coastal traditions.

A huge vase displaying Bidri carving sits in the center of the scene, flanked by two large peacocks of the same art. A gigantic installation of Hanuman displaying Kinhala artwork stands at the end of the middle section, surrounded by Chennapatna toys, lacquerware toys, Navalgunda cloth, sandalwood sculptures, and terracotta goods. The Department of Information and Public Relations has met the criteria for 13 years since chief minister Devaraj Urs entrusted them with creating the tableaus in 1972.