KSRTC Bus Body Is Now A Classroom In Bagwadi

Let’s bring the creativity in, Prashanth Achar from Bagwadi is an artist who is incredible at making replicas of buses. A few years ago, he had prepared a prototype of such buses and handed them over to the then transport minister, Laxman Savadi. He had also brought to the notice of the minister the lack of classrooms in the school of his village. The education department in association with KSRTC has taken the initiative to experiment with his idea.

Bhagwati school has a history of 97 years. It has 87 students. For seven classes from first to seventh standards, only five rooms are available. There is no room for a laboratory or library. The school had submitted a request to the department and now the bus runs as a classroom.

Prashant, who happens to be a past student of the said school, had brought to the notice of the minister the shortage of rooms in the said school. The minister had promised to bring it to the notice of the concerned, and also announced the decision to provide a bus as a temporary measure. In  December 2020, he had dispatched a bus to the school. It has now been aesthetically designed and modified into a smart classroom. 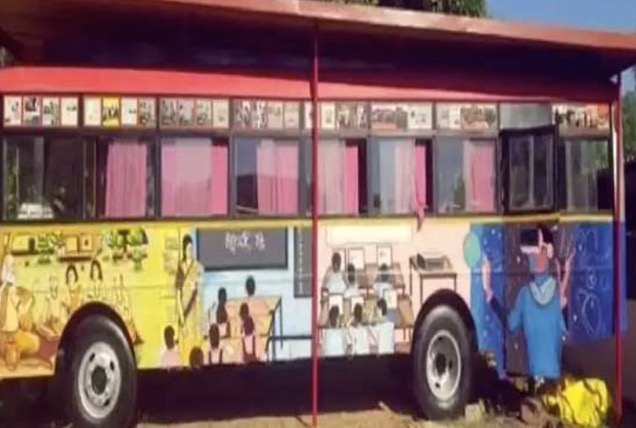 The bus is quite long. By installing solar panels, lighting and fan facilities have been arranged for conducting lessons through audio medium. There is a plan to set up a library also on one side of the bus.

The inauguration of the bus will be on Saturday, March 12 by district in-charge minister S Angara. MLA B M Sukumar Shetty will preside over the programme while Minister Kota Srinivas Poojary, former MLA Gopal Poojary and others will participate.

Headmistress of the school, Shylaja V Shetty, said that the minister had sent an old bus to the school. She said that there was a delay in preparing the class because of Covid19.  Light and air arrangements have been made properly inside the bus, she added.

Prashant Achar expressed happiness over the fact that the minister had obliged and provided a bus at his suggestion. He said that he had made a bus model from thermocol in the past and that now a proper bus has reached the school.