After receiving the Padma Shri award from President Ram Nath Kovind at Rashtrapati Bhavan in Delhi on November 8, orange seller Harekala Hajabba received a warm welcome when he arrived in Mangaluru on November 9. On behalf of the Dakshina Kannada district administration, Mangalore Tahsildar T. G. Guruprasad welcomed him at Mangalore International Airport on his arrival from Delhi through Bengaluru. The district administration arranged for an official vehicle to transport him to the Deputy Commissioner’s office, where Deputy Commissioner K. V. Rajendra honored him. 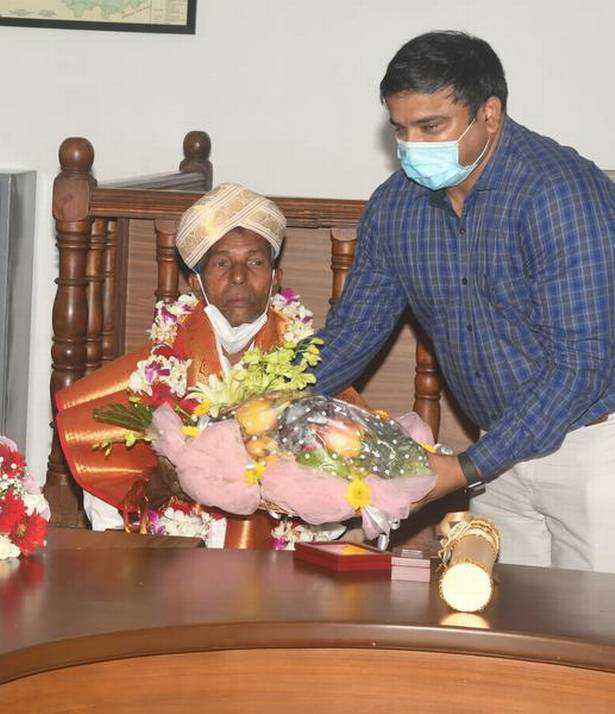 When the Padma Shri awardee met with Union Minister for Finance and Corporate Affairs Nirmala Sitharaman after collecting the award, he stated his demand. He requested a college from her because she was elected to the Rajya Sabha from Karnataka. Mr. Hajabba, who was in his 60s, made a living selling orange in Mangaluru’s Central Market area. A stranger once inquired about the cost of a kilogram of oranges. He couldn’t respond since he can’t speak English. He chose to build a primary school because he did not want the children of Harekala village to suffer a similar fate.

On June 17, 2000, the school opened in a madrasa. Later, it was converted into a government school. In 2007, the high school portion was opened. Mr. Hajabba funded the school using government funds as well as corporate and private donations. He had first put up Rs 5,000, which he had saved from selling oranges. The school now provides classes ranging from first to tenth grade.

His achievements were studied in undergraduate courses at the universities of Mangaluru, Davangere, and Kuvempu. In addition, children in Kerala’s Kannada-medium schools were taught about him in classes 8 and 10. He has received multiple honors and puts the money into enhancing the school’s facilities.

The India Meteorological Department (IMD) has forecast significant rainfall in most regions of Karnataka. Rains are expected to lash the coastal districts of Udupi,...
All News