Haritha KK is India’s first female captain of a fishing vessel. The 25-year-old is from the Ezhupunna panchayat of Alappuzha and attended Kochi’s CIFNET. She believes that there’s nothing impossible for a woman to conquer, not even the sea. Haritha was unable to join the Navy because she did not meet their physical requirements. That’s when she learned about the potential benefits and decided to give it a shot. 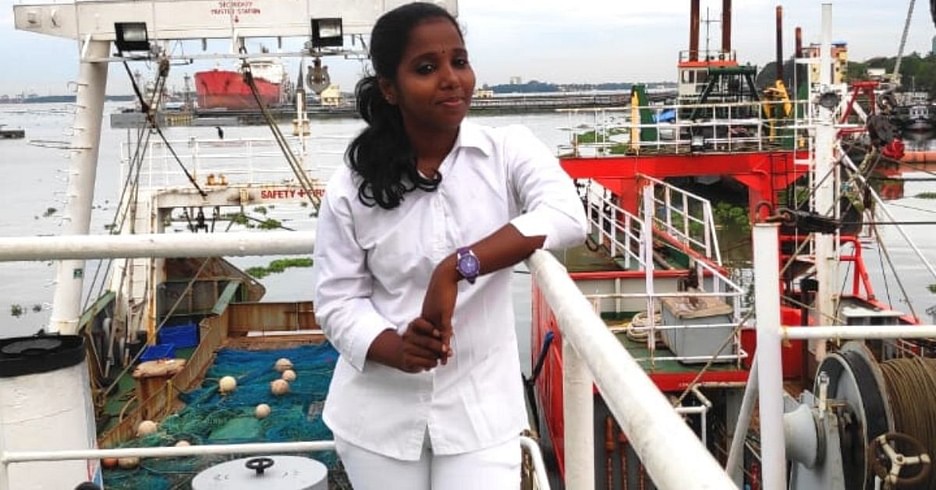 Haritha decided to pursue her ambition of becoming a captain soon after completing her Bachelors in Fishing and Nautical Science at the CIFNET in 2016. She started as a deckhand aboard the Prashikshani, a CIFNET training vessel, and sailed for around 180 days. When Haritha Ramachandharaswamy joined CIFNET as a deckhand in 2016, she became the first woman to serve on a fishing vessel’s crew. Haritha had to attend a slew of supplementary courses after her first sailing in 2017 to prepare for the “Mate of fishing vessels” examination, which is required to become a Mate or Chief Officer.

Over two years, Haritha Anand achieved the position of the chief officer and sailed for 450 days onboard the CIFNET vessel Prashikshani and the Fisheries Survey of India’s (FSI) vessel Lavanika. It helped me get one step closer to achieving my goal. With a crew of 21 and 15, she reached the India-Lakshadweep coast. It was a huge responsibility, as per Haritha.

Haritha had to complete 450 days of sea service as part of her training to become a skipper (captain). She sailed from Australia to the US from February to September 2021. The skipper’s exam included a written test, a signal exam, and orals. Haritha attempted and cleared her written test in December 2020. Soon, she joined the Merchant Navy as she needed an income and decided to attempt the rest of the tests during her breaks.

When the majority of her female college classmates decided to pursue higher education and divert towards academia, Haritha stood out with her decision to be in the sea. She believes that there is nothing unachievable if you have the right mindset and courage. There is a kind of prejudice in our society surrounding such professions. It’s high time women broke such social myths and took up these professions. If a man can do it, so can a woman.