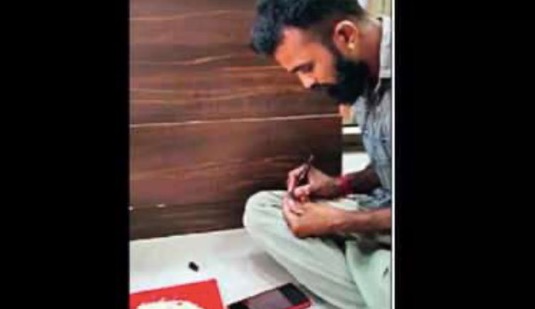 Creativity is always mindblowing, Micro artist Paramesh from Subrahmanya in Dakshina Kannada is making wonders with his skill, also aiming at entering the Guinness Book of World Records by writing a biography of our Prime Minister Narendra Modi in English by using 20,000 rice grains.

The 28-year-old Paramesh, who wrote Nadageethe – ‘Jai Bharatha Jananiya Thanujathe’ in Kannada on 136 rice grains in 80 minutes, is preparing to take the minimum amount of time to write Modi’s biography.

“I learned the micro art on my own, without any training and by practicing for the past 10 years. In addition to Nadageethe, I have also written a full version of ‘Vande Mataram’ on 92 rice grains. I am now preparing to write the history of Kukke Sri Subrahmanya Temple in Kannada, by using rice grains, before attempting Modi’s biography. I have read about a woman achiever from Andhra Pradesh writing the Bhagavad Gita on 4,042 rice grains. However, she had not fixed a time frame to complete it. I have decided to create a record by writing on rice grains, by taking minimum time,” said Paramesh, a businessman who sells spices and dry fruits in Subrahmanya.

Paramesh takes a maximum of two minutes to complete writing on a single grain of rice. “I write an average of 20- 30 characters on a single rice grain in two minutes. I will present the Nadageethe I have written on 136 rice grains, to chief minister Basavaraj Bommai in a week or two. I will later start writing about the history of the Kukke Temple. Soon after completing the Kukke temple’s history, I will approach the authorities of the Guinness Book of World Records to write a biography of Modi on rice grains in English, in their presence. The biography of Modi will include his early life, political career, and his achievements as a chief minister and Prime Minister,” he added.

One by one, he is looking forward to astonishing his skill in different ways, Hoping the best that Paramesh gets into Guinness Book of World records.

A 21-year-old solo rider Amrutha Joshi from Kumble Kasargod is back at her school and received a warm welcome at Canara High School in...
#VocalForLocal