HackVerse3.0 came to an end with team ‘MintMoney’ from NITK, Surathkal winning the title, with a project titled ‘Muse Docs’, a nationwide hackathon organized by the National Institute of Technology Karnataka. The team members – Dwaipayan Munshi, Nikhil Sahu and Jai Khandelwal won a cash prize of Rs 50,000 along with goodies and special prizes.

Team ‘Psudeo’, bagged the runner up with a cash prize of Rs 35,000, consisting of Tankala Yuvaraj and Subhramanyam Konakanchi from SRM University with their project `Pseudo’. The second runner up award was won by Sidharth Sahni and Hari Vishnu Parashar of team ‘Mugiwara Noethereum’ from VIT Vellore with their project – ‘The Closet’. 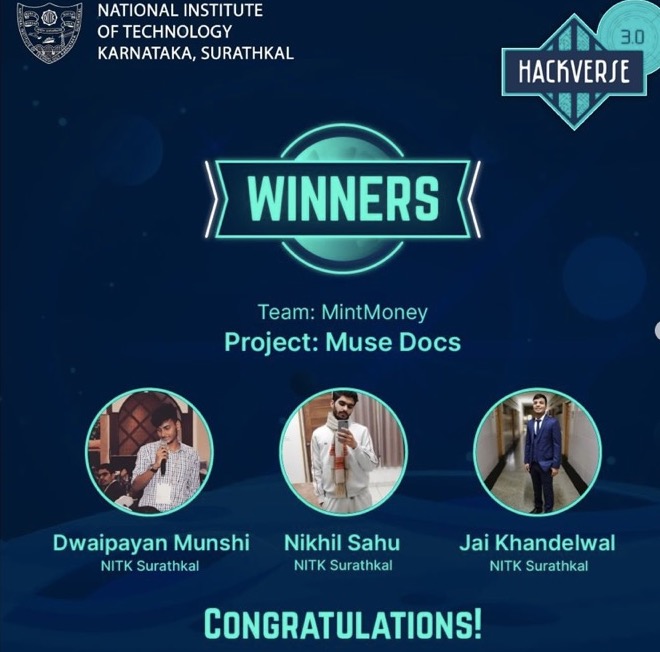 5445 HackVerse provides a stage for trailblazing innovations, where developers can analyse real-world obstacles and let their creativity abound. HackVerse 3.0, was held online and concluded on February 27. It received more than 1,500 registrations from 50 plus institutions from all over India. According to organizers, the event was held with hundreds of skilful candidates making the cut after a meticulous review process based on predefined criteria and their technical profiles. The Innovative and visionary projects were developed and presented.

Udaykumar Yaragatti, director in-charge, NITK, Surathkal inaugurated the event.  Prakriti Goyal was the lead organizer and Ritik Pansuriya was the technical lead, both BTech final year students along with other students.