Miyawaki Forest To Take Mangalore Out From Summer Heat 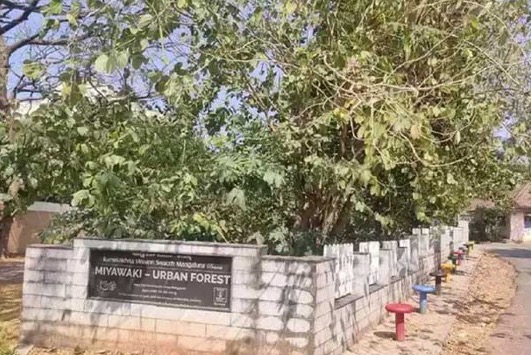 As Summer is ahead, Mangalore Miyawaki forests are grown throughout the city in order to keep the city cooler. Mangaluru City Corporation, Mangaluru Urban Development Authority and social organizations are taking an active part in this project.

Forest will come upon 70 cents land near KPT in the city. As many as 2,000 saplings will be planted here. Biocon is giving financial help. The Forest department is also cooperating with urban forest development.

Many interested people have grouped together under the umbrella of ‘Navainooru’. The aim of this group is to plant more than 500 plants in a year, fencing them and growing them by watering them daily. Around 2,500 saplings are already planted from Nanthoor to Someshwar.

“Ramakrishna Math has already planted more than 230 saplings on four cents of land near the Zilla panchayat office in 2019. Local fruit plants are given more importance. Ramakrishna Math has started a city forest campaign on their premises also. A person has promised to give his private land to grow city forest,”  Also the Miyawaki forest experiment has given fruit at three spots in the city. In the future, there is a plan to grow one lac tree at around 100 spots in the city. We are confident that the public will cooperate in this project.”said Ekagamyananda Swamiji of Ramakrishna Math.

“Space is identified at 38 spots in the city in order to grow city forest. If we get CSR funds from corporate companies this can be implemented faster. The Forest department will supply plants for growing Miyawaki forests,” said Dr Y Dinesh Kumar, deputy conservation officer of the forest department.