New Gallery To Come Up In Mangala Stadium 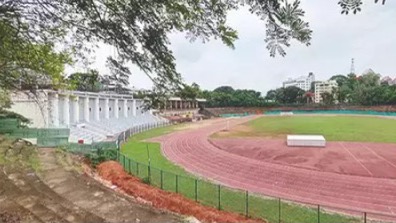 A detailed project report (DPR) will soon be prepared to commence the second phase of developmental works at the Mangala Stadium which involves the construction of a full-fledged gallery.

Once the proposal is cleared by the central government, the old gallery at the stadium, where the 17th National Youth Festival was held in 2012, will be demolished. A rough estimate was made by the department of youth empowerment and sports earlier, to construct a new gallery at an estimated cost of Rs 120 crore.

Recently, district minister V Sunil Kumar visited the stadium, as part of his inspection of Smart City projects in the city. The first phase of work involving the construction of a new pavilion and other facilities, at an estimated cost of Rs 10 crore, through the Mangaluru Smart City Limited (MSCL), is nearing completion at the stadium. The minister had directed officials to prepare an estimate, to construct a new gallery at the stadium, which has a capacity to seat 40,000 spectators.
Deputy director of youth empowerment and sports, Pradeep D’Souza, told that a comprehensive DPR will be prepared for the Mangala Stadium soon.

“During the inspection carried out for the work, the minister has given instructions to the MSCL, to prepare a DPR for the proposal of constructing a new gallery for the stadium. The DPR will be submitted to the Union ministry of youth affairs and sports. There are provisions under the Khelo India programme of the central government, to take up such development works. Hence, the minister and MLAs have suggested a comprehensive DPR to be prepared for Mangala Stadium, and the same can be submitted to the central government,” he said.

“A DPR to construct 12 blocks for a gallery at the stadium, at an estimated cost of Rs 120 crore, was prepared three years ago. A gallery of 80m stretches, for one block, has already been constructed through the Smart City project. Hence, a DPR to construct a gallery for the remaining 11 blocks of the stadium will be prepared soon,” he added.

Under phase one of the Mangala Stadium development project, other than one block for a gallery, a gymnasium and VIP lounge, other facilities are also being constructed through the MSCL, he said, adding that the work is expected to be completed within a month.