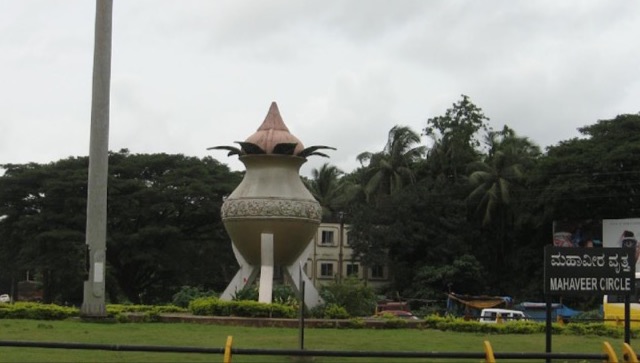 After long years, the remarkable Kalasha at Mahavir (Pumpwell) Circle is set to get back,   The Jain community in Mangalore has decided to reinstall the kalasha which was once a centre of attraction to the city.

The structure was installed on 43 cents of Mahavir circle as part of the Mahavir Janma Kalyanak festival of the Jain community in 2003. Later, the kalasha with a garden at the circle became an attractive landmark for those entering the city. However, the huge kalasha installed by the Jain community at a cost of Rs 12 lakh had to be shifted to facilitate the construction of a flyover in 2016.

The MCC has decided to allot space to reinstall the kalasha near the flyover and to bring back the remark after the Jain community in Mangaluru sought permission,

“Jain community in Mangaluru have got approval from the city corporation to reinstall the kalasha at the junction. The kalasha weighing nearly 30 tons, which was the main attraction at the Mahavir Circle, had to be removed to facilitate the construction of the flyover. We have plans to paint the kalasha and reinstall it by beautifying the area,” said Pushparaj Jain, president of the Mangaluru Jain Society.

Mayor Premanandha Shetty said, a meeting of Jain community members and Karnataka Bank will be held soon to discuss the beautification of Mahavir Circle. “The erstwhile Pumpwell Circle was renamed as Mahavir Circle based on the request of the Jain community. They have sought permission to reinstall the kalasha at a place near the junction that links the national highway service roads and the city bypass road. Meanwhile, Karnataka Bank also has plans to beautify the area. Hence, we will prepare a plan by holding a meeting of all stakeholders soon,”.

On the 3rd of July, the earth shook once again under the limits of Chembu village lying on the border of Dakshina Kannada and...

Mangaluru : Seven CFAL students have qualified the KVPY Aptitude test and now advance to the final round of Kishore Vaigyanik Protsahan Yojana (KVPY)...
All News

IndiGo raised its wings now to the national capital from the coastal city commencing operation on the Delhi (DEL)-Mangaluru (IXE)-DEL sector with an...

Online Applications Made Mandatory In Karnataka To Transport Cattle