Punches and Kicks Makes Rahul Into The Asian Book Of Records.

Kodagu district has got new warriors, which has already contributed thousands of warriors, sports personalities to the nation. Keeping its tradition of shining in various fields, a youth has come up with achievement by gaining entry into the Asian Book of Records with his karate skills in January 2022, after being entered into India Book of Records in December 2021.

Meet young and energetic martial arts lad 20-years-old K Rahul, hailing from Virajpet in Madikeri/Kodagu district, who achieved a new feat with a record-making 262 punches and 262 kicks in One Minute in karate. In view of the Covid pandemic, the achievement was recorded online.

Rahul is the first person from the Kodagu district to create such a record. Earlier, Rahul had secured a place in the India Book of Records. The karate tournament in which participants from 18 countries participated, was organized jointly by Dynamic Shotokan Karate Du Association, World Union of Martial Arts Association, World Karate Alliance, and Evolution of Karate, in December 2021. Rahul who was very fond of karate since childhood started practicing the art when he was just twelve years old. “A lot of hard work and perseverance for a decade was behind my achievement. I owe my success to my parents who encouraged and supported me in this sport. Everyone has innate talents and they should make good use of them through practice.” said Rahul. 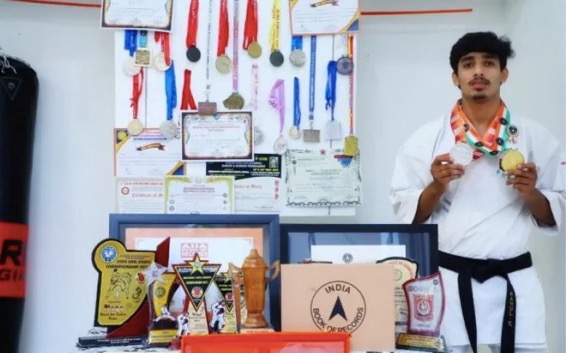 Rahul has won many medals and achievements at State and national level championships apart from gaining entry into the Asia Book of Records. He won first place in the Kata and Kumite division in 2016 in the Karate championship organized by Karate Tues UECHI RYU DO India of Kerala. He strove many years to gain entry into the India Book of Records, where he was issued an identity card, certificate, and medal to Rahul. Rahul was trained by karate expert H R Shivappa. In September 2021, he won a gold medal in an international online karate championship competition organized by the World Union of Martial Arts Federation, World Karate Alliance, following which he aimed to gain entry into the Asia Book of Records- and he succeeded. 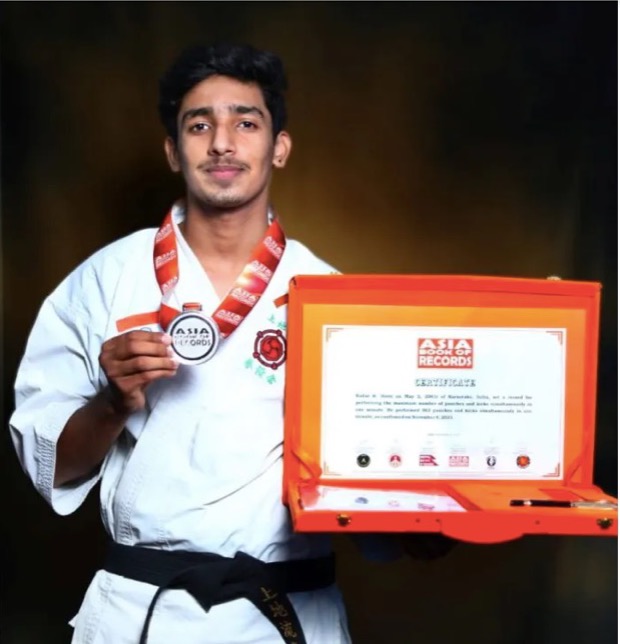 Rahul said, “Karate is not merely a martial art for self-defense, but offers a lot to sportspersons to achieve. Kodagu, the smallest district in the State, has contributed hundreds of sports talents to the country. Many talented sportspersons have proved their mettle in international and national level sports competitions. Following in the footsteps of all these Kodagu athletes, I was really keen on Martial arts and Athletics. I was so dedicated to karate that at my first Karate tournament in Karate Times Cup 2016, I secured 1st position in Individual Kumite and Kata. Since then I reached greater heights in this Art, winning top places in various Karate tournaments”.

Born to Kumar, who runs a metal shop in Virajpet, and Varalakshmi, a homemaker, Rahul attended St Anne’s Composite High School and is currently enrolled in a pre-university BA program at Mangalore University. He enrolled himself in UECHI RYU Karate school at the age of 12. In 2017, he won third place in Karate Times Cup; In 2017, Karate tournament organized by Naga Martial Arts Academy (R) Mysore SHORIJINI-RYU, he won 3rd position and In Kumite 2nd position; he won 2nd position in Kumite in 2018 Karate Times Cup; First place in SEIKO FUKUCHI CUP-2018 SOUTH INDIA in Individual Kata and Kumite; In 2019, in the Karate Times Cup at Kannur he gained 3rd position in Individual Kata and 2nd Position in Team Kata and bagged many other achievements.

Rahul is the new raising hope for Karate among youth as he has won a series of prizes, and his passion for Karate was inspired and supported by his parents in winning many laurels and awards consistently so far. It’s time for other youth to follow in his footsteps, take up Karate or any other sports, and make it big.