Mangaluru, March 8: St Aloysius B. Ed College, a leading institute of teacher education of the city celebrated International Women’s Day here on the theme ‘BREAK THE BIAS.’ The chief guest of the programme Mrs Sameena Afshan, President, Muslim Mahila Sangha, Mangalore, in her address highlighted that, “society has endowed different roles to men and women. Better life comes from gender equality rather than gender discrimination. Gender discrimination is a universal problem and it is prevalent in every part of the world. The subjugation of women affects their lives in terms of socio-economic and educational spheres. It also cuts across cultural and religious barriers, impeding the right of women to participate fully in society. Discrimination of women is considered to be one of the major human rights violations as it acts as a hurdle for women participation and their promotion in different social spheres. Women need not ignore their feminine identity to achieve in life; rather women should identify their gifts and abilities bestowed to them as women to move forward in achieving their goals. Families should be a place to practice gender equality so that the children will be able to understand more about each other and play a significant role in maintaining equality. Empowering women in India is very necessary. 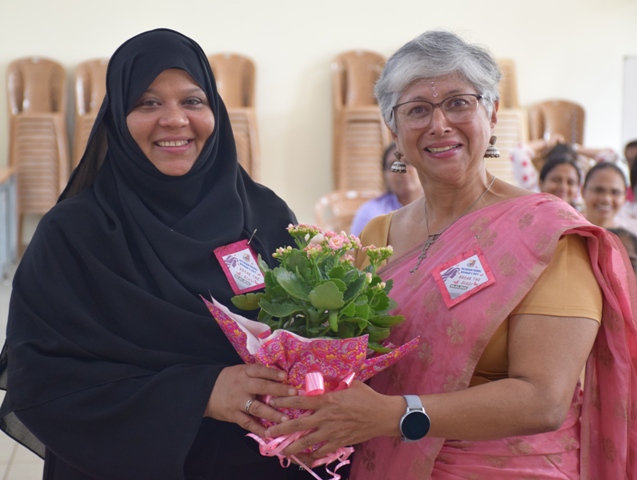 Speaking on the occasion, Dr Mrs Farita Viegas, Principal, said, “International Women’s Day is a global day celebrating the social, economic, cultural, political and educational achievements of women. The day also marks a call to action for accelerating gender parity. A Woman has the power to create, nurture and transform. When we say, ‘Break the Bias’, it is important that we speak out when we see it happen or experience it. Education and a collective effort will bring about gender equity.”

During the occasion, the outgoing students of the fourteenth batch handed over a gift to the principal, as a token of love and appreciation. The programme had consisted of a prayer song, welcome address, highlights on the significance of celebrating women’s day, a group song and the vote of thanks. The programme ended with the singing of the College Anthem. Mrs Joshna B, the staff in charge organized the programme.