This Year Karnataka Is Setting For A Grand Dasara Celebration 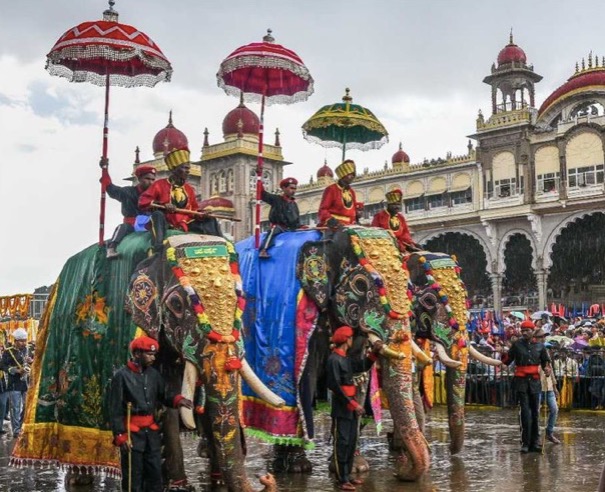 The all-time favourite festival Dasara, which is also called ‘Nada Habba’ (festival of the land) will be celebrated in the historical town Mysuru on a grand scale this year decided by the Karnataka government.

Over the last two years, due to the Covid-19 pandemic, Dasara has been a simple affair. The state government has accepted the popular view to make the Dasara festival a grand celebration this year. The festival attracts global tourists and people from across the country.

Chief Minister Basavaraj Bommai said the State government has decided to create the ‘Mysuru Dasara’ brand and go for an international publicity campaign to make it a major global event. The Commissioner of Information and Public Relations department has been instructed to hold publicity campaigns in Mumbai, Delhi and Chennai airports.

The Navarathri Dasara will start on October 26. Nandi Dhwaja Puja, Pushparchane and other traditional rituals would be performed on October 5, Vijayadashami. ‘Gaja Paya’, the return of the Dasara Elephants to their habitat would be on October 7 and 8.

The government order on Mysuru Tourism Circuit would be issued within a week. Tourism promotion programmes would be formulated by the Tourism department in association with private players. The circuit would include Belur, Halebidu and other places.

According to an official release by the government, all-inclusive single ticket packages covering travel, accommodation and other aspects would be introduced. An exclusive website is being developed for the purpose. This would complement the initiatives for Mysuru Dasara.

Many traditional rituals and practices associated with this state festival like ‘Gaja Payana’ would be revived. This would draw greater participation of the rural masses, CM Bommai added.

The government has also decided that the Mysuru Dasara emblem should be published in all government advertisements, notifications and social media platforms.Also the Dasara Exhibition ahead of the festival this year will be inagurated. A grant of Rs 1 crore each has been provided for Dasara Celebrations at Srirangapatna and Chamarajnagar.