Traffic jams have become a common sight in front of Mini Vidhana Soudha in the city. The daily agitations, allowing the protesters to park on the roadsides has led to commotions and traffic blocks. The motorists and daily commuters are facing difficulty to pass through this area. 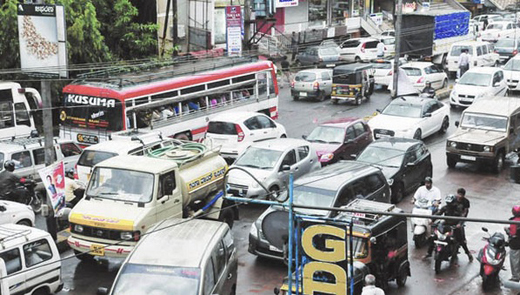 This inconvenience is an addition to the ongoing construction of the underpass under the Smart City Project already causing traffic problems in the vicinity. The stay order from the court has led to the halt in the work of underpass. The interlock work of Mini Vidhana Soudha also is half done, banning the entry of vehicles inside the Mini Vidhana Soudha. This led to the officials and employees parking their vehicles on roadside, creating congestion for free movement of vehicles. The block due to this brought traffic police to fine all the vehicles parked on the roadside.

To avoid this crisis parking for those going to Mini Vidhana Soudha is provided in the premises of town hall.  But this is possible only with a U turn from A B Shetty circle which is additional travel for the daily commuters. So the parking spot in Town Hall remains unused and vacant.

The traffic ACP has decided to put forth a proposal with district administration, for permission to hold protests inside the Town Hall premises, which can accommodate 400 to 500 and also the presence of Mahatma Gandhi’s statue to the protesters delight.

AC of the district has clearly prohibited the entry of vehicles into Mini Vidhana Soudha premises and requested the public to use the Town Hall premises till the work is completed.

Tulu is probably going to replace Kannada as the second official language of Karnataka. A committee has already been established in this regard, and...
All News