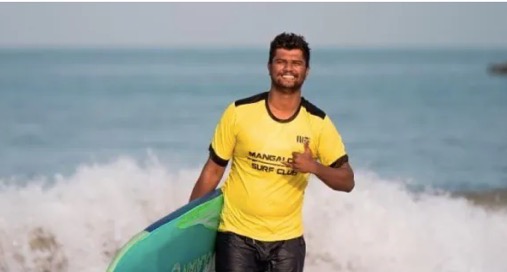 Over the past few days there have been cases of youth drowning either at Malpe Beach or the surrounding areas, but today morning we would have lost two more youth from a college in Moodbidri if a  surfer didn’t rescue them. On April 24, 2022, in the morning at around 8 A.M., a group of five students currently studying at a College in Moodbidri, visited Tannirbavi Beach and were enjoying the waves and splashing around the water. Unfortunately, there was a rip current and the group was pulled deeper into the water. They got panicked as not all-knowing how to swim. Fortunately for them, a brother and sister duo who had come to swim in the open sea noticed them in distress and rushed to help. Sanketh Bengre & Ms Shilpa Bengre swiftly aided two victims and helped one who partially knew how to swim to reach the shore.

The remaining two were saved at this moment when Tejas Naik, a Life Member, and Head Coach of Mangalore Surf Club who was giving surf lessons nearby noticed the panic-stricken shouts. He immediately took a surfboard and paddled out to rescue them. It was a few minutes of tension, but after quick counselling and enabling the two distressed victims to use the surfboard, Tejas brought them back to the shore. Sure to effective training, and quick response by the Bengre siblings and Tejas all five victims were rescued and brought back to the shore. They were administered first aid immediately and were guided on water safety as well.

All ‘Swachh Vahini’ vehicles, that transport waste in villages can have GPS devices hereafter as Dakshina Kannada Zilla Panchayaths(DK ZP) has plans to...

Konkani and Tulu actor Sunil Bajal, well-known for his work in the entertainment industry, is no more due to cardiac arrest here on...
All News

A 'Vinaya Samarasya' campaign will be launched by the state government to create awareness against the practice of untouchability in villages across the state...