Women also to be trained in the field of Kambala

Kambala is a sport of the coastal Karnataka, enjoyed and played mostly by men.But in the recent the Kambala Academy has considered to train women in the sport of Kambala and break the long tradition of male dominated sport of buffalo race. The discussions on this with experts has decided to train women in the posts as announcers, flag bearers and also as jockeys. 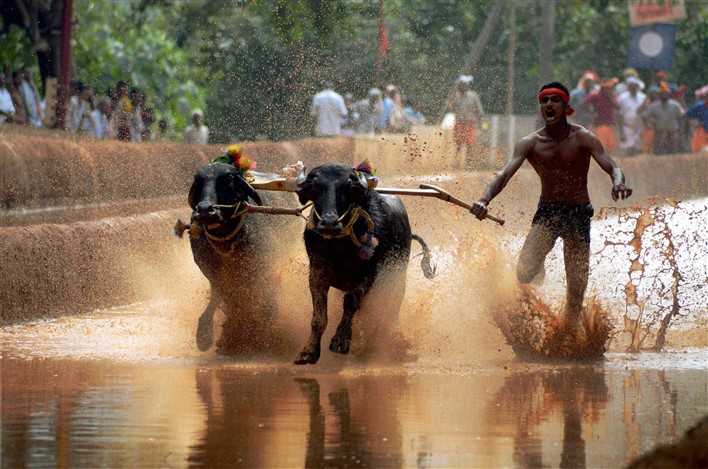 Dakshina Kannada Kambala Committee and convener, Kambala expert, founder secretary told the public about the training given by the Kambala academy. The concept of training women in Kambala has been under pipeline for long, it got a true spark after the experts in the committee met the filmmaker Rajendra Singh Babu. Rajendra Singh Babu has been working on a film portraying Kambala. In the recent past, Kambala has been getting recognition internationally.

Also women have paved their way in the field of Yakshagana, Weightlifting, Cricket and emerged successfully. So now it is indeed an opportunity for women to showcase their abilities in the field of Kambala. Though this initiative will  set in some disapproval by many, it will indeed become a milestone if successful. Accepting all the challenges, the Kambala committee has decided to take a bold step of training women in Kambala.

Considering the safety, dress code and fitness with medically proven tests is the first and foremost before training women for Kambala.So the experts have taken discussions with utmost precision and care in this matter. Training season will commence from the  end of the Kambala season till the start of the next one in November.This year a few women will be trained for the time span between September to October. But all individuals will be screened and selected.

In the due course of time, male jockeys will continue their training owing to the ever increasing fame of Kambala.Record of 207 pairs of buffaloes participation in the Koti-Chennaya Jodukere Kambala, Moodbidri shows the glory of Kambala.

On the other hand film on Kambala is expected to release shortly, that too in Tulu,Kannada and other South Indian languages.The team behind this is attending Kambalas and collecting the required literature to understand the sport better. The release of this movie will promote our regional sport and the culture linked to it world wide.The academy plans on familiarizing this sport to the public by setting up a museum, library and conference hall at Moodbidri.