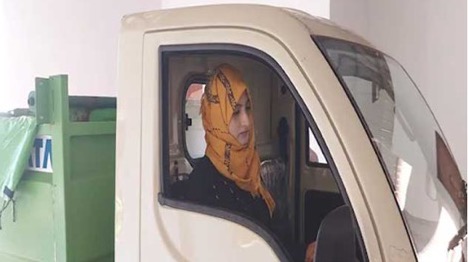 The Dakshina Kannada’s woman vice president of panchayat has attracted the attention by driving the garbage collecting vehicle herself. Nafeeza Tasli is the vice president of Peruvayi Gram Panchayat in the taluk who has set an example for others to emulate. Though some of her Muslim community members are not happy with what she is doing, Nafisa is continuing her work with the support of her family.

Though Peruvayi Gram Panchayat had received a vehicle for handling waste six months ago from the government, it was unused as the drivers were unavailable. Nafisa took a bold decision and said that she would drive the vehicle till a permanent driver is recruited so that the waste gets transported to the garbage collection and handling site.

Now the vehicle has started collecting garbage from the market area of Peruvayi. Nafisa encourages villagers to give the waste to the vehicle in order to segregate the same effectively. There are 600 houses under Peruvayi Gram Panchayat. Nafisa has full cooperation from her husband and family members in her task and vision of making Peruvayi a clean village. She does not bother about some dissidents in her community.

Nafisa has shown earlier also that when it comes to cleanliness she is the most responsible person in the village. She has worked as a cleaning worker during the sprucing up campaign that was undertaken by Peruvaje Gram Panchayat with the cooperation of Ramakrishna Mission of Mangaluru.

Later, Nafisa was elected the vice president in the last gram panchayat elections. She leads from the front and drives the vehicle. The villagers have high regard for the work done by Nafisa according to Balakrishna Poojary, president of the panchayat.

At present, she makes rounds in the Peruvayi market area twice a week with her vehicle. Villagers are also responding positively to her efforts.