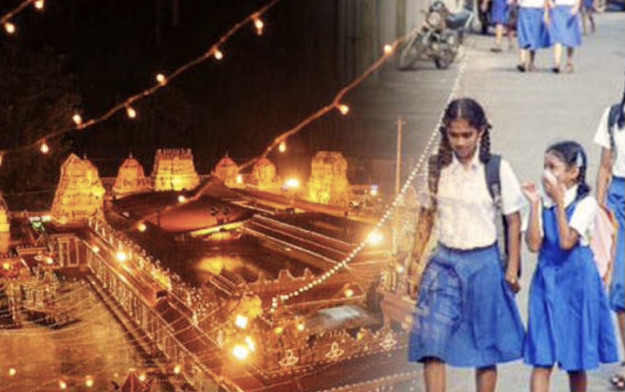 Keeping Dasara ahead, Minister of primary education BC Nagesh directed the Dakshina Kannada district administration to revise the holiday schedule for the Dasara festivals. He said schools must close for the Dasara festivities from September 26 to October 10 in Dakshina Kannada, as against the earlier notification, according to which schools were to remain closed from October 3 to 16.

On the other hand, the pre-university department has announced holidays for the festivities from October 1 to 13. Meanwhile, confusion prevails in the schools of Dakshina Kannada, since the festivities are scheduled to be held between September 26 and October 5 in the region. Should the schools adhere to the government’s new calendar, children may not be able to participate in the local festivities.

Heads of schools, teachers, and parents had appealed to the government to ensure that the Dasara vacation in the coastal districts adhered to the schedule followed by the locals. The minister admitted that a request had been made by the people of Dakshina Kannada to revise the calendar for the holidays. He said that the Dakshina Kannada DC had been asked to ascertain whether the dates of the local festivities coincided between September 26 and October 10. “If that is the case, the holiday calendar will be altered. The holidays must be declared on the condition that Gandhi Jayanti is celebrated on October 2,” Nagesh added.

Tulu is probably going to replace Kannada as the second official language of Karnataka. A committee has already been established in this regard, and...
All News