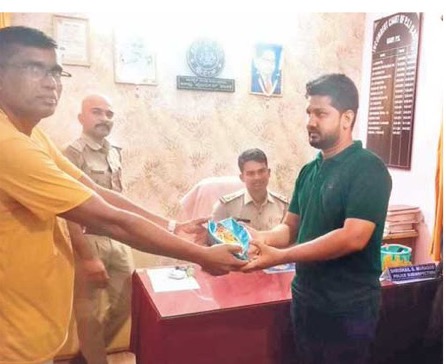 Honesty is an act that comes from within, Canute Menezes, an entrepreneur from Shankarapura shows that honesty by returning a bag containing 40 sovereign gold which he found near the Chokkady railway bridge on the Katapadi-Shirva route to its rightful owner.

Ansira Banu, who was travelling to Shirva in an autorickshaw, had lost her bag containing golden ornaments near the railway bridge. Canute was riding his bike on the same route when he found the lost bag. When he checked the bag, he noticed that it contained gold. He immediately took that to the Katapadi outpost police station and handed it over there.

Meanwhile, Ansira Banu, who had lost the bag, was enquiring about the same at the Katapadi autorickshaw stand. As both the instances happened at the same time, the Katapadi outpost police called her to the police station and handed over the bag to her relative after verifying that the golden ornaments indeed belonged to her.

Canute has been praised by the person who found the bag as well as the general public and the police.