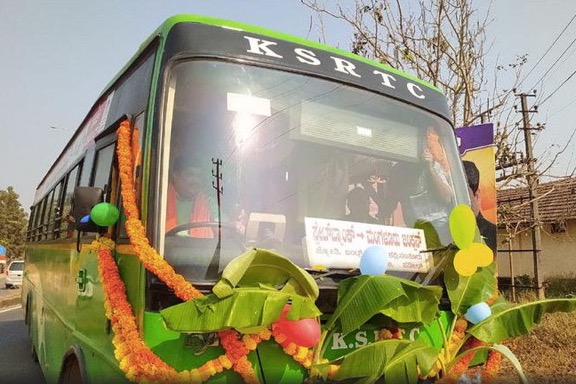 Flagging off the services, Mr Kamath said that the facility will be of much help to local residents as well as railway passengers. He said that two buses will operate on the route at an interval of about one hour to make 19 single trips.

The Dakshina Kannada Regional Transport Authority (RTA) on February 14 issued a temporary permit to the KSRTC valid till June 13 to operate the services. The first service from Mangaluru Junction will start at 6.50 a.m. and the last at 6.35 p.m.

From State Bank, the first service will start at 7.30 a.m. and the last at 5.55 p.m. It will operate via Dr Ambedkar Circle (Jyothi), Bunts Hostel, Kadri, Nanthoor, Maroli and Padil.

Commenting on the new service, social activist Gopalakrishna Bhat said that it is a welcome move as Mangaluru Junction had very few bus services. He had been fighting to get the service for the last seven-eight years in different ways.

Mr Bhat said that the demand has been realised with the proactive approach of [MLA] Mr. Kamath, the local councillor of Mangaluru City Corporation and the residents. The service connects State Bank with Mangaluru Junction for the first time, he said.

The RTA also issued a temporary permit to KSRTC on February 14 to operate city services between State Bank and Adyar (Sahyadri College) via Bunts Hostel, Maroli and Kannur. The service is yet to be introduced.