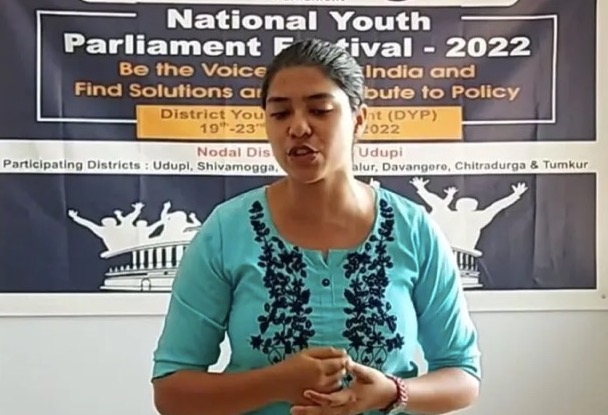 Lerisa D’Souza, a student of MAHE who is studying Mass Communication & Media, won second prize in the National Youth Parliament Festival 2022 at the Karnataka state level , a speech competition which was held virtually from Bengaluru being organized from block level to the national level by NYKS, Ministry of Youth Affairs & Sports, Government of India.

National Youth Parliament Festival 2022 is a national level competition conducted by the government of India in association with the Ministry of Youth Affairs and Sport and the organization of the same is conducted by Nehru Yuva Kendra in all the 624 Districts in India. All participants will get 4 minutes to put forth their thoughts as the vision of the Prime Minister is to draw the attention of the Youths to spell out their vision on subjects such as Beti Bachao Beti Padavo, Sub Ka Sath Sab Ka Vikas Aur Sabka Viswas, Digital India, Startup Up India, Make In India, Ek Bharath – Shrestra Bharath, Clean India, Fit India Campaign, were some of the subjects.

At the state level, there were 58 participants i.e. 2 each representing 29 districts of Karnataka. Lerisa spoke on the subject ‘Ek Bharath Shrestra Bharath’, which won her 2nd position in the state, she was selected to represent the Udupi district at the state level earlier in the last week.

Now she will have the opportunity to go to New Delhi for the national level competition at India’s Pride and prestigious Central Hall of the Indian Parliament, along with the winners of first and third positions at the state level. Only the winner at the state level will represent Karnataka and compete for Karnataka, but the second and third prize winners will be in the audience of the Central Hall of India’s Parliament. They all will get an audience with the Prime Minister of India, the Lok Sabha Speaker and other esteemed dignitaries. This programme will be held in the Live or Physical Mode and telecast live. The winner at the national level will take home the first prize purse of Rs 2 lac and citation, Rs 1 lac and Rs 50,000 for the second and third prize winners.

Deputy Commissioner of Udupi Kurma Rao M, IAS, expressed his happiness and congratulated Lerisa for bringing glory to Udupi. Lerisa is the daughter of Lavina D’Souza and well-known and renowned police officer, Valentine D’Souza, who is presently serving as DYSP in Uttar Kannada district.