Life takes different turns, Durgappa Angadi from Sasaravalli in Shikaripur taluk of Shivamogga district had once considered ending his life, by the burden of loan that was staring at him. He, however, got the inspiration after watching the integrated farming system in a channel and dropped the idea of suicide. He has now emerged as a role model for the farmers.

Then the deputy commissioner of Shivamogga district, K A Dayanand, seeing for himself the fondness with which Durgappa was cultivating his land and undertaking other activities, has written a book about Durgappa. Mangalore University has adopted it as a textbook with the name, ‘Krishi, Rishi, Khushi’ for the second year degree students 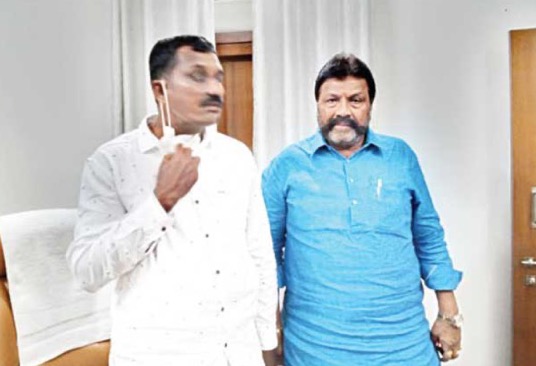 In the year 2009, Durgappa, overtaken by frustration at the huge loan burden of Rs 13 lac he was faced with, had decided to commit suicide. Now he earns six to seven lac rupees a year. He has been inspiring and educating the farmers about integrated farming methodology and instilling in them a sense of self-confidence. Many farmers from Shikaripura and Sorab taluks under his positive influence, have adopted integrated methods of cultivation. He works in his field with his wife right from morning to evening without hiring any laborers. Besides beekeeping, he undertakes pisciculture, poultry farming, animal husbandry, dairying, the raising of dogs, and the cultivation of vegetables, areca nut, and fruits. Durgappa Angadi has undertaken an organic method of cultivation in his 2.25 acres of land without the use of any chemicals.

He uses Jeevamrutha, tonic spray, and manure obtained from decomposing the greens. He never uses chemicals even for minor purposes. During the Covid pandemic, he was unable to sell the harvest. Instead of losing heart, he personally undertook the sale of fruits and vegetables and earned three lac rupees. He has won four state-level awards including Dr. Veeresh endowment award, state-level award of Krishik Samaj etc. He has won many district-level and other awards. He also serves as an advisor for the agricultural research station of Shivamogga district. He takes classes for the students and creates awareness about agriculture.

State minister for agriculture, BC Patil, who heard his story, invited him to his office and praised him for his grit and hard work. The minister said that Durgappa has shown others how to come out of worries about the loan burden and how to double income. He hailed the farmer for inspiring other farmers to repose faith in the potential of integrated farming.