Red Alert Due To Heavy Rainfall In The District

In this era of social media, It would be the biggest weapon and opportunity to promote our city, which can give a big push to tourism in the city, So Mangalore City South MLA D Vedavyas Kamath has decided to use social media, through the ‘#MarvellousMangaluru‘ campaign, to promote coastal food, religious places, historic sites and education.

As a first step, a meeting with social media influencers, bloggers, and Facebook page admins will be held at the Atal Seva Kendra, Kodialbail, on Sunday. With no major beaches in the south constituency, Kamath is keen on promoting other aspects of the region.
MLA Kamath told: “Our aim is to tap the tourism potential of the city. While various development works are in progress, we will request social media influencers to continuously post stories and updates on various aspects of the city, with the hashtag MarvellousMangaluru. The plan of action will be explained to the city’s social media influencers and bloggers, and the posts should be such, that it catches the attention of tourists, and encourages them to visit. In the long run, the city should be known as ‘Marvellous Mangaluru’,” he said. 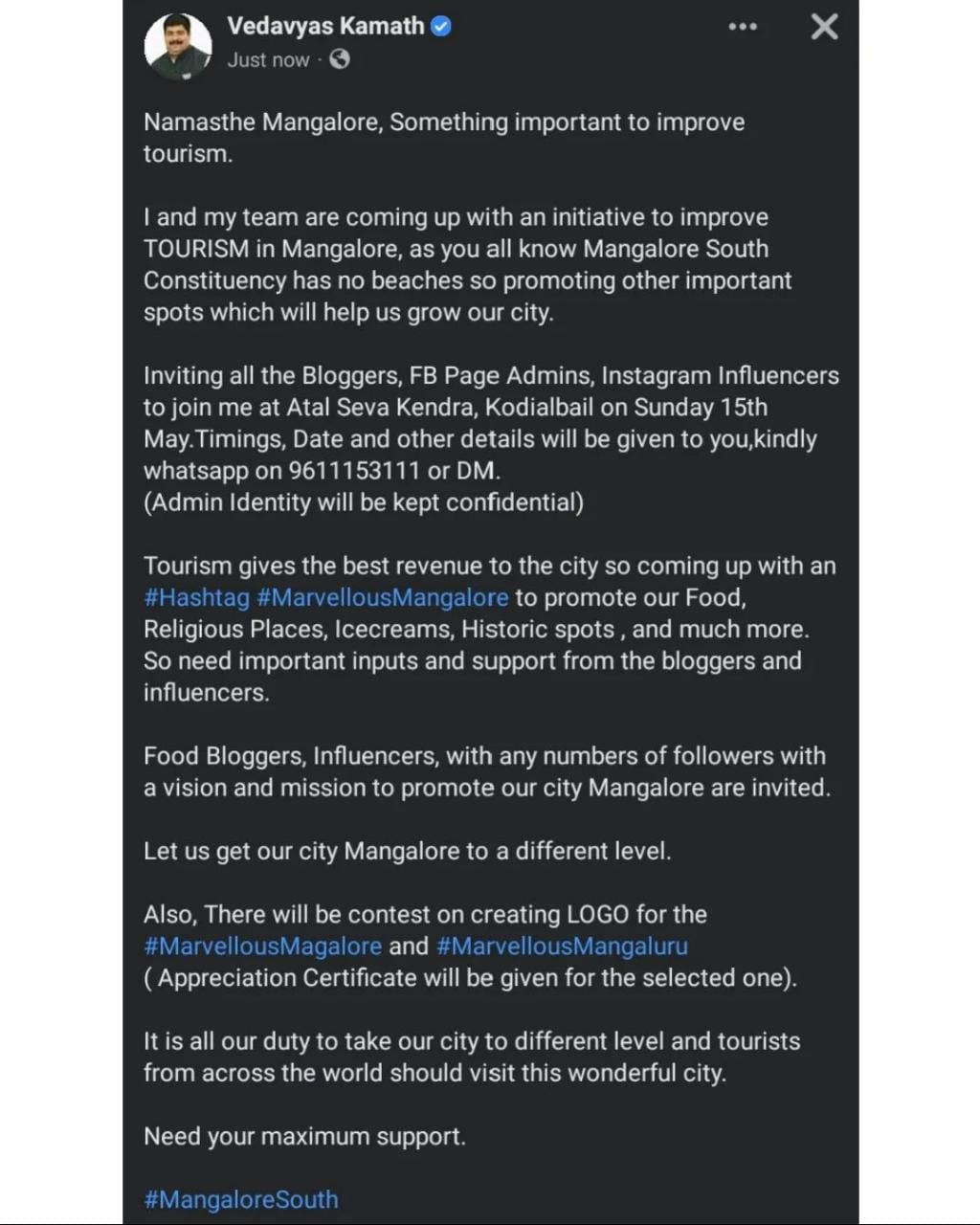 The posts will focus on every aspect of Mangaluru, from food outlets like a famous churumuri outlet, fish or ice-cream outlet, temple tourism, Yakshagana, Kambala, and Bootha kola, in addition to medical and education tourism. “We will expect the influencers to also post updates on important projects in the city, like riverfront development works, or the pedestrian-only hanging bridge between Sultan Battery and Tannirbhavi, across the Phalguni River. The moment posts go viral and #MarvellousMangalore trends, we will have tourists wanting to visit in large numbers, and the city in the long run could also grab the attention of investors. The aim is to send out a message on the changes taking place,” he said.
A contest to create a logo for the campaign will also be held, and a certificate of appreciation will be given to the selected one.

All ‘Swachh Vahini’ vehicles, that transport waste in villages can have GPS devices hereafter as Dakshina Kannada Zilla Panchayaths(DK ZP) has plans to...

As SSLC results are out Gayathri, a student of Government Girl's High School is one among the five toppers in the SSLC examination in the...
#VocalForLocal

To commemorate nationalism as part of the Azadi Ka Amrit Mahotsav, the Kannada and culture department will celebrate ‘Amritha Bharatige Kannadarati’, a programme in...