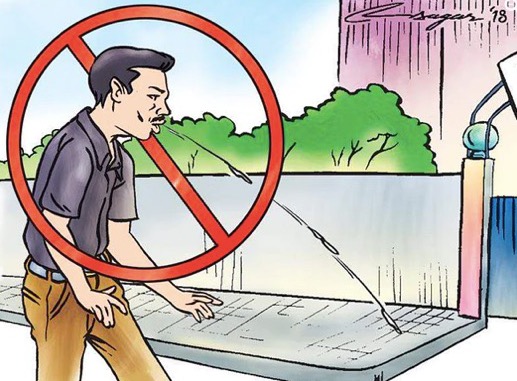 From the next year, the education department has decided to launch a ‘No Spitting in the Public’ campaign in all schools in Dakshina Kannada district

The deputy director of public instructions (DDPI) K Sudhakar said, “We have decided to implement the campaign in three phases in all primary, higher primary and high schools of the district. The campaign has drawn inspiration from the work taken up by Beautiful Bengaluru, which had also initiated the Stop India Spitting Campaign. Though a punishable offence, many people do not take it seriously. This is an attempt to spread awareness among children and their parents, thus attempting to bring in a change in this habit, that has been prevalent for many years”.

The department has already taken up the idea with the officials, and a relevant session will soon be held to discuss its implementation. The Indian Red Cross also will be joining the campaign as they agreed, and the department will also approach several other NGOs. “Depending on the situation, we plan to reach out to children in every possible way. We are planning in such a way, that the campaign will not be impacted, even if we have to shift to the online mode of education. We will present children with short videos and films on the negative impact of spitting and will use every possible platform to reach out to them and their parents. Competitions will be held for parents, and we are planning to rope in stree-shakti groups,” said Sudhakar, who has already taken up several campaigns on water conservation and reducing plastic use.

One round of discussions has been held with Zilla panchayat CEO Kumar, who agreed to the implementation of the project. Along with this, the department will continue to focus on personal hygiene, and stress on following regular hand washing and keeping the surroundings clean.