After 2 long years, The only public swimming pool of Mangalore City Corperation[MCC] at Lalbagh here will be open for all. MCC has decided to open Mangala Swimming Pool for the public based on a recent direction from the government. 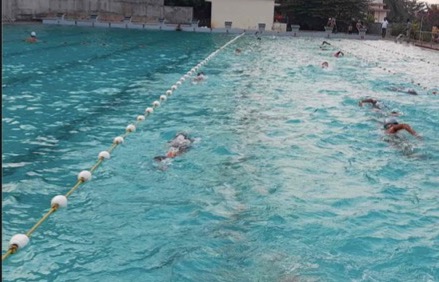 Accordingly, MCC has started the necessary maintenance to repair the pool by replacing tiles. The pool will be open by the end of March, said pool manager Ramesh Bejai.

The pool was closed when the pandemic began and later it was opened only for sports batches, especially for swimmers participating in district, state and national events. “We were not allowing the public with entry coupons. Six months ago, we started allowing those who have annual passes based on their vaccination status. Now the government has relaxed the rules, and MCC has taken up necessary maintenance work to keep the pool ready. Once opened, all people including children will be allowed to use the pool,” he said.

Mayor Premananda Shetty said, the repair work has been progressing quickly. “We have decided to open the pool to the public as the government has given directions that all those who have taken two doses of vaccine may be allowed. More lifeguards will be appointed on a contract basis,” he said.

“The MCC had dismantled an old filter plant and equipped the pool with an ozonisation plant to ensure the quality of water and to cut maintenance costs. The new ozonisation plant installed at a cost of Rs 98 lakh was inaugurated in February 2019. The plant will save approximately Rs 50 lakh per year for the MCC since it does not require the replacement of water from the pool every six months. With the new ozonation plant, the water needs to be replaced once every two or three years,” he added.