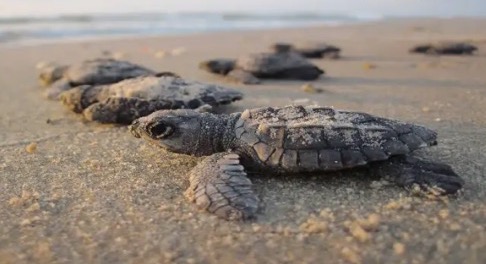 Udupi will witness something different this time. The forest department, in association with various organisations that are working towards the conservation of sea turtles in Kundapur, has decided to hold a sea turtle festival next month, at Kodi Beach in Kundapur.

Representatives from various organisations, including FSL India, Reef Watch Marine Conservation Centre and Clean Kundapura Project are involved in the conservation of olive ridley sea turtles. Kundapur DCF Ashish Reddy mentioned, “The event will be held once the hatchlings are released into the sea. We are planning to organise a two-day event this year. The purpose of the festival is to spread awareness on turtle conservation and felicitate stakeholders”.

Bharath Bangera of the Clean Kundapura Project said the objective of the festival is to save sea turtles and prevent sea pollution. Due to Covid-19, a low-key programme was held last year. This year, the department plans to rope in celebrities. Also, “Awareness is certainly the need of the hour. Volunteers from FSL India and the forest department are spending sleepless nights on the beach, to protect the eggs. There are a lot of myths that need to be busted. There are people who still believe that by consuming sea turtles, they will live a long life”.

Meanwhile, Milagres College Kallianpur organised a flash mob on the theme, ‘Save sea turtles and sea pollution,’ on Sunday, as part of the ‘Save Our Oceans’ campaign launched by the Clean Kundapura Project, in association with FSL India.

Every day, doctors scurry around treating the sick as if they were busy bees.But! The Father Muller Convention Center will host Doctors unplugged with...
#VocalForLocal