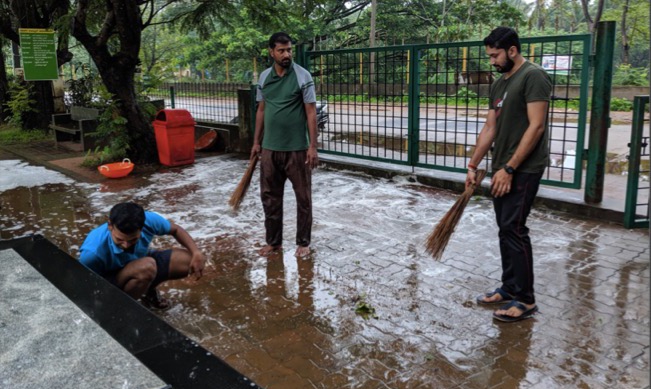 Swachh Karkala Brigade celebrated its 100th clean-up drive by coordinating with more than 100 teams in organising clean-ups at 100 different locations. The massive drive was undertaken to precipitate the message of Swachh Bharat and increase public participation for the noble cause.

To raise awareness about the Swachh-Bharat Mission, the team organised a short movie competition called #SwachhaMevaJayate with the theme of Swachh-Bharat with the prize money of Rs 10,000 for the winner and Rs 5,000 for the runner-up. Team Surya-Chandra creations won the competition and Team Gurukula Aided Higher Primary School, Mala consisting of more than 100 school children came second.

Swachh Karkala Brigade organised ‘Swachha Sangama’ on the banks of Ramasamudra lake the location of the very first clean-up, amid nature as part of the centenary cleanathon.

The pioneer of the Swachh Bharat revolution in Mangaluru Ekagmyananda Seer of Ramakrishna Mission applauded Swachh Karkala Brigade for the work done so far and stressed the importance of waste segregation and management.

Minister and Karkala MLA V Sunil Kumar, who is also a member of Swachh Karkala Brigade, applauded the team for the journey and for inspiring many teams in the taluk to take up similar work.

The team honoured Solid Liquid Resource Management (SLRM) employees and Pourakarmikas who are the backbone of waste collection and segregation. The team has started several other initiatives along with the weekly clean-ups to raise public awareness and public participation