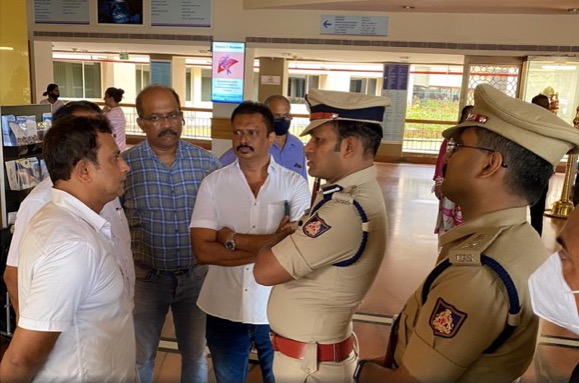 Nagaraj was among the two persons injured after a car hit a median in Ballalbagh on April 9. The car crossed the median and hit head-on the vehicle of Ms Nagaraj and three other vehicles, which were among the vehicles that had slowed down following the traffic jam. Ms Nagaraj, who was returning after attending a ceremony related to her father in the Kudroli Gokarnanatha temple, sustained a serious head injury.

After a 13-day long treatment, the doctors at the A.J. Institute of Medical Sciences declared her brain dead. “She was a healthy woman and did not have any health complications. My relatives, who are doctors, suggested the donation of her organs. I agreed for harvesting her organs and transplanting them to needy patients,” said Ms Nagaraj’s husband Manoj Kalya. His daughter Shifali, who is studying MBA in Bengaluru, also agreed to organ donation, he said.

The liver was sent by flight to the recipient in Aster CMI hospital in Bengaluru, while a kidney each was sent by road for transplantation to a patient each in KMC Mangaluru and KMC Manipal hospitals. The city traffic police provided zero traffic facilities for the movement of organs to the three hospitals.

Her husband Mr Manoj said car driver Shravan Kumar should be awarded exemplary punishment for the accident. “He recklessly drove the car that resulted in the death of my wife.” Mr Manoj said the car did not have third party insurance and the car was yet to be registered in Shravan’s name. The car was fully covered with ‘illegal’ tint.